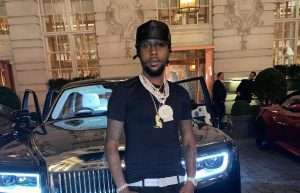 (URBAN ISLANDZ) – Popcaan had a wild night in Ghana that ended with gunfire and reports of an attempted robbery forcing law enforcement to intervene.

The Dancehall deejay was seen in a video being assisted by security personnel and Ghana Police Service officers on Wednesday night as shots rang out and confusion ensued at a popular nightspot in the city.

The Ghana Police Service is yet to respond to a request for comment on the situation, but reports by media in Ghana claim that the artist was helped by police officers and security personnel after alleged armed robbers attacked the club in East Legon in Accra.

Details have not been officially released by the authorities, and Popcaan has not confirmed the reports, but a video circulating online showed men beating down what appears to be the entrance to the club before one is seen pointing at an unknown person. The person who shot the video narrated that the man was pointing at Popcaan.

Later, several shots were heard intermittently. About a minute later, Popcaan can be seen ushered to his vehicle as he is surrounded by armed police and other persons said to be his security detail. A man is also seen handcuffed at the end of the video.

Media outlets from Ghana claimed that Popcaan, whose real name is Andre Sutherland, was at the venue around midnight when the incident reportedly occurred and that the shots were fired by police officers.

The reports allege that there was an attempt to rob the artiste, and three of the alleged robbers were shot.

There is no confirmation regarding the deaths. However, on Twitter, the Ghana Police Service reported that six armed robbers were arrested and five others killed during an anti-robbery intelligence-led investigation in the country. The police say there was a gun battle in that incident. However, details have not been disclosed as yet to say whether this is the incident involving Popcaan.

His travels to Ghana have been frequent and not without concern. In November 2021, the artist had shared fans excitedly attempting to hop onto his car in Ghana. The stubborn fans refused to get off of his vehicle leading to his security guards firing warning shots into the air to disperse persistent fans who hopped onto the moving van.