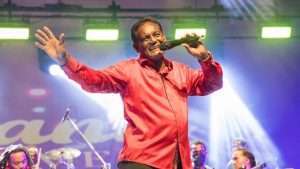 Kenny J spent what was one of his favourite times of the year, Christmas, at the Augustus Long Hospital, Pointe-a-Pierre, fighting for his life.

After a two-week battle with Covid-19, which saw him being treated in the intensive care unit, Kenny J succumbed to the dreaded virus that has claimed close to 3,000 lives in Trinidad and Tobago.

His daughter, Jesselle Joseph, yesterday Saturday that her father was fully vaccinated. He was 69 years old.

Kenny J was featured recently in a public service announcement video series spearheaded by promoter Randy Glasgow and produced by the National Lotteries Control Board (NLCB).

The series comprised short video clips in which artistes and other popular personalities encouraged members of the general public to get vaccinated.

Prior to falling ill, Kenny J performed at several Christmas events, including a WACK FM Christmas special and the Parang with Rome concert, where he reminded audiences to get vaccinated and to always be careful.

Kenny J possessed a honey-dipped voice just like Baron and Sugar Aloes, which made him a hit with both men and women.

His quiet manner and infectious smile endeared him to his fellow calypsonians who considered him the consummate gentleman.

Kenny J tried his hand at soca parang in 1993, releasing “The Paint Brush,” a well-crafted double entendre that became an instant hit.

The song became synonymous with Kenny J and the Christmas season, through the years becoming an evergreen classic. He would enjoy the same level of success with two other soca parang releases during the 1990s, “Alexander” and “Hush Yuh Mout,” which guaranteed Kenny J work during the Christmas season for over two decades.

Kenny J died one day after the calypso fraternity lost Clifton Ryan, the Mighty Bomber, who was 93.

Speaking briefly with the Express yesterday, president of the Police Service Social and Welfare Association Insp Gideon Dickson extended his condolences to the family of the former policeman.

“We were deeply saddened upon hearing the news today. We would like to extend our deepest condolences to the family, friends, and retired colleagues of Mr Kenny J.

His legacy will certainly live on in his music. May his soul rest in eternal peace,” Dickson said.

Minister of Tourism, Culture and the Arts Randall Mitchell paid tribute to both men in a social media post: “My deepest condolences to the families of Mighty Bomber and Kenny J.

Thank you for the contribution you made to enhancing our music and for taking Trinidad and Tobago internationally. May you both rest in peace. Folded hands.”

And National Carnival Commission (NCC) chairman and calypsonian Winston “Gypsy” Peters, in a Facebook post yesterday, extended “condolences to the family of Kenwrick ‘Kenny J’ Joseph, the fraternity will surely miss you. Rest In Peace!”

Opposition Leader Kamla Persad-Bissessar extended condolences, stating: “Rest in Peace to a true cultural icon Kenny J. Condolences to all his loved ones during this time of mourning.”