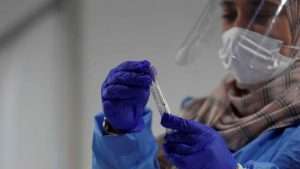 (DAILY MAIL) – A young pregnant woman has become the first person in the world to be infected with both Covid and the flu.

The woman tested positive for both viruses in Beilinson Hospital in Petach Tikva city, Israel, on Thursday.

She is suffering mild symptoms and Israeli health officials are studying her case to determine whether the combination causes any greater severity of illness.

Her case is first documented in the world but doctors believe there could be more ‘flurona’ infections in the country.

Professor Arnon Vizhnitser, director of the hospitals’ Gynaecology Department, told Hamodia: ‘She was diagnosed with the flu and coronavirus as soon as she arrived.

‘Both tests came back positive, even after we checked again.

‘The disease is the same disease. They’re viral and cause difficulty breathing since both attack the upper respiratory tract.’

The woman is expected to be discharged on Thursday.

Professor Vizhnitser said: ‘We are seeing more and more pregnant women with the flu. It is definitely a great challenge dealing with a woman who comes in with a fever at childbirth.

‘This is especially when you do not know if it’s coronavirus or the flu, so you refer to them the same. Most of the illness is respiratory.’

It comes after Israel’s health minister yesterday said the country is extending its offer of a fourth vaccine dose to elderly people in care facilities.

Nitzan Horowitz announced the move on Friday, citing their high exposure and vulnerability to infections.

Israel had already extended the rollout of fourth doses to people with weakened immunity, becoming one of the first countries to do so in hopes of countering a case surge driven by the Omicron variant.

The country is in the midst of a surge in cases, with more than 5,000 cases recorded yesterday.