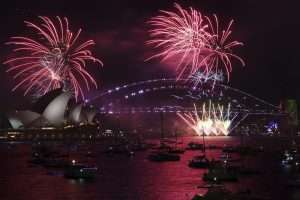 That was a common sentiment as people around the world began welcoming in the New Year.

In many places, New Year’s Eve celebrations were muted or cancelled for the second straight year due to a surge of coronavirus infections, this time driven by the highly contagious omicron variant.

Even before omicron hit, many people were happy to say goodbye to a second grinding year of the pandemic.

But so far, at least, the omicron surge hasn’t resulted in the same levels of hospitalisations and deaths as previous outbreaks — especially among vaccinated people — offering a glimmer of hope for 2022.

Because of where the international date line sits, countries in Asia and the Pacific region are among the first to usher in each new year.

New Zealand was one of the first places to celebrate the New Year with a low-key lights display projected onto Auckland landmarks, including the Sky Tower and Harbor Bridge. That replaced the traditional fireworks show. While there hasn’t yet been any community spread of omicron in New Zealand, authorities still wanted to discourage crowds gathering.

Neighboring Australia, however, was going ahead with its celebrations despite an explosion in virus cases. Some fireworks were let off early in the evening to give younger children a preview of the centerpiece of festivities, the renowned fireworks display from the Sydney Harbor Bridge and Sydney Opera House.

Hours before the celebrations began, Australian health authorities reported a record 32,000 new virus cases, many of them in Sydney. Because of the surge, crowds were far smaller than in pre-pandemic years, when as many as 1 million revellers would crowd inner Sydney.

In South Korea’s capital, Seoul, the annual New Year’s Eve bell-ringing ceremony was cancelled for the second straight year due to a surge in cases.

Officials said a pre-recorded video of this year’s bell-ringing ceremony would instead be broadcast online and on television. The ceremony had previously drawn tens of thousands of people. Last year’s cancellation was the first since the ceremony began in 1953.

In India, millions of people were planning to ring in the new year from their homes, with nighttime curfews and other restrictions taking the fizz out of celebrations in large cities including New Delhi and Mumbai.

Authorities have imposed restrictions to keep revelers away from restaurants, hotels, beaches and bars amid a surge in cases fuelled by omicron.

Many Indonesians were also forgoing their usual festivities for a quieter evening at home, after the government banned many New Year’s Eve celebrations. Vietnam also cancelled fireworks shows and celebrations.

In Hong Kong, about 3,000 people planned to attend a New Year’s Eve concert. The concert will be the first big New Year’s Eve event held since 2018, after events were cancelled in 2019 due to political strife and last year because of the pandemic.

In mainland China, the Shanghai government cancelled events including an annual light show along the Huangpu River in the city center that usually draws hundreds of thousands of spectators.

There were no plans for public festivities in Beijing, where popular temples have been closed or had limited access since mid-December. The government has called on people to avoid leaving the Chinese capital if possible and requires tests for travelers arriving from areas where there are infections.

But in Thailand, authorities were allowing New Year’s Eve parties and fireworks displays to continue, albeit with strict safety measures. In the Philippines, a powerful typhoon two weeks ago wiped out basic necessities for tens of thousands of people ahead of New Year’s Eve.