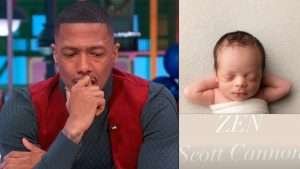 (JAMAICA OBSERVER) – American comedian, rapper and actor Nick Cannon has disclosed that his youngest child Zen Cannon passed away from a brain tumour on Sunday.

Sharing the devastating news on his latest show, “The Nick Cannon Show”, on Tuesday, the entertainer fought back tears as he shared the loss of his five-month-old son.

In a video that has since been posted to his Instagram page with the caption “A message from Nick”, the father of six other children, shared that the loss was particularly hard to talk about and that up until that moment, he had not shared the news with anyone.

“I had a very tough weekend and before we get into the why I have to show the pic (picture) of the day,” he said holding up a photo of Zen.

“My youngest son, Zen Scott Cannon right there,” he added before pausing to hold back tears. “Zen was born in June, June 23rd actually. A great day. Ya’ll know I got a lot of kids and Zen was my youngest and so I got to do the introducing Zen photo and I was so excited.”

Cannon said his youngest son was doing great up until the two-month mark when he noticed he had a breathing issue. The actor said he thought at first that it was some sinus-related problems but he decided to take Zen to the hospital for a check-up nonetheless. He said it was during that visit that he found out his son had a malignant tumour in his head.

Despite surgery, Cannon said things took a turn for the worse around Thanksgiving and the tumour began to grow rapidly.

He began breaking down as he recalled the last moments he spent with his son.

“Not only did we see the sunrise but we got to see the sunset,” he said.

Zen was Nick’s 7th child and the fourth to be born in the last year. He shared Zen with model Alyssa Scott.