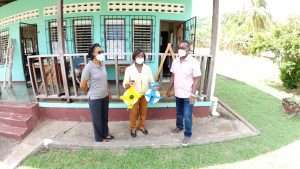 PR – Two (2) Extension Officers at the  Ministry of Agriculture have been recognized by the Inter-American Institute for Cooperation on  Agriculture (IICA) for their participation in the 2021 Forums that were delivered as a 4-part series  under the theme “Strengthening the Climate Resilience of Caribbean Agriculture”.

The forums which commenced in 2015, act as a neutral space where farmers, agri-stakeholders  and enthusiasts share, learn, plan, and promote policies, strategies, and actions towards more  productive, low emission, sustainable agriculture.

As a result of their active participation from August to November, the two (2) officers, Marcia  Lord and Brenda Phillip were on Monday incentivised with tools that will be used in their  fieldwork (tape lines and an A-Frame) from IICA’s National Specialist, Derek Charles.

“I was happy to be part of the training organized by IICA. They were timely and informative.  Understanding that we have a lot of farmers that farm on sloping land, we will be able to use the  A-frames to do proper drainage for them,” Lord explained.

Extension Assistant, Brenda Phillip, said the extension team is, “thankful for the gesture as the  tools will go a long way.”

Grenada qualified for the prizes as a result of full participation in all sessions. There was also  active participation in discussions on key climate issues, and practical adaptation and mitigation  approaches that can be implemented. Charles said it was a job well done by the officers who  represented their country.

“Grenada did well; out of the fifty-one participants, eleven of those were Grenadians. The  Extension officers from Grenada and Carriacou, along with the backyard gardeners, actively  participated, and I was happy to see that they were rewarded.”

All participants received certificates of participation. The Ministry congratulates the officers for  their active participation in the forum and extends its gratitude to the Inter-American Institute for  Cooperation on Agriculture (IICA) for its unwavering support towards the development of the  agriculture sector in Grenada.