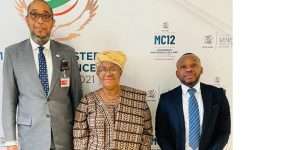 PR – Ambassador Colin Murdoch, the Permanent Observer of the Organisation of Eastern Caribbean States (OECS) to the United Nations Office in Geneva paid a courtesy call on Dr. Ngozi Okonjo-Iweala, Director General of the World Trade Organization on Friday, December 3, 2021.

Ambassador Murdoch and Dr. Okonjo-Iweala discussed a range of issues including bringing the fisheries subsidies negotiations to a successful conclusion, agreeing on a WTO response to the COVID-19 pandemic, WTO Reform, development issues, and maintaining momentum towards the reconvening of the 12th Ministerial Conference of the WTO.

The OECS’ chief spokesperson in Geneva assured the WTO Director General that the region remained supportive of her agenda and has not wavered in its commitment to support meaningful outcomes at the WTO. Ambassador Murdoch also indicated that key to the success of the WTO was the rebuilding of trust among its membership.

The WTO Director-General thanked the OECS Ambassador for the visit and called on the region to continue to play a constructive role in the work of the WTO.