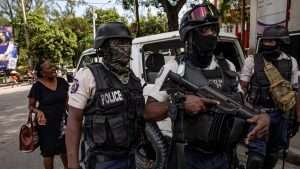 (CMC) — The former secretary of state for public security, Réginald Delva, has warned that “the armed bands are better equipped and seem better organised than the National Police of Haiti (PNH)”.

Delva, speaking on the increase in kidnappings for ransom in the French-speaking country, said that the bandits strike where and when they want.

The Center for Analysis and Research in Human Rights (CARDH) said more than 782 kidnappings for ransom have occurred since the start of 2021.

Delva said that Joseph Wilson, alias “Lanmò Sanjou”, the leader of the “400 Mawozo” gang, is an extremely dangerous individual, who even though wanted by law enforcement authorities, usually plays the humanitarian card by sometimes freeing hostages in poor health.

Delva believes that the bandits have a psychological advantage over the society and is urging the PNH to take advantage of periods of “relative calm” to strike against the criminal gangs insisting that the police need to regain the ground lost to the groups.

The former secretary of state was also critical of the authorities for not sufficiently informing the population about cases of kidnappings and the precautionary measures.

Meanwhile, CARDH coordinator, Gédéon Jean, estimates that gangs “currently control 60 per cent of the national territory, including strategic axes for the country” and that these gangs have field experience as well as financial and material resources at their disposal.