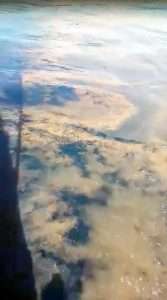 (CMC) – The Environmental Protection Agency (EPA) says it is investigating claims of an oil spill offshore Guyana, after several videos were posted on social media showing a substance in the water offshore, in an undisclosed area.

Over the past few months, Guyana has become a major oil-producing country with the authorities announcing over the last weekend that three Mexican investors have expressed an interest in massive infrastructure projects here including building an oil refinery.

“A fishing boat is on its way with staff from our Emergency Response Team to the general area as we don’t have specific coordinates, and also an aerial surveillance is being conducted today,” the EPA said.

The regulator also asked that fisherfolk and members of the general public who come in contact with the substance, take samples of it as well as coordinates of the area in which it is seen.

The EPA said it is doing everything possible to get to the bottom of the matter.

Director-General of the Civil Defence Commission (CDC), Lieutenant Colonel Kester Craig said the CDC is awaiting the initial assessment by the EPA. In the meantime, the CDC is working closely with the entity and the National Oil Spill Contingency Committee.

Craig said once there is a detailed understanding of what is happening, the media will be updated.

The government has a National Oil Spill Contingency Plan to employ in cases of emergency.

In one of the videos posted online, a fisherman is heard saying that the substance in the water is causing local fisherfolk lower catches.

Agriculture Minister Zulfikar Mustapha had informed stakeholders in the fisheries sector last month, that the government had already engaged the EPA and the United Nations’ Food and Agriculture Organisation (FAO) to assist with an analysis to determine the reasons for low catches.

EPS executive director, Kemraj Parsram said on Sunday that the process has already begun and that the FAO is taking the lead on the matter. He said they will meet with EPA representatives on Monday.