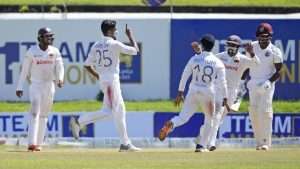 (AP) — Spinners Ramesh Mendis and Lasith Embuldeniya took five wickets each to propel Sri Lanka to a crushing 164-run win over West Indies in the second test Friday and a 2-0 series sweep.

Chasing 297 to win, the West Indies reached 65-2 in the second innings at lunch on the fifth day but the tourists were bowled out for 132 in the third session. They lost their last eight wickets for 40 runs.

Embuldeniya had best figures of 5-35 while Mendis recorded 5-66, and collected 11 wickets in the match.

Sri Lanka was still batting when play started on the final day and they declared their second innings on 345-9 in the morning session.

Sri Lanka had scored 204 in its first innings and the West Indies made 253, taking a 49-run lead.

Dhananjaya de Silva was unbeaten on 155 and his overnight partner Embuldeniya was out for 39 bowled by Jason Holder.

West Indies lost its first second-innings wicket with the total on 15 when captain Kraigg Brathwaite (6) was trapped lbw by Mendis.

Then Nkrumah Bonner joined Jermaine Blackwood and the pair added 50 runs for the second wicket before Blackwood (36) was caught by de Silva off Embuldeniya in the last ball before lunch break.

When Mendis had Shai Hope (16) caught by Lakmal, West Indies’ score stood at 92-3, but it triggered the late collapse.

Bonner top scored for the West Indies with 44.

Sri Lanka won the first test at the same venue by 187 runs.