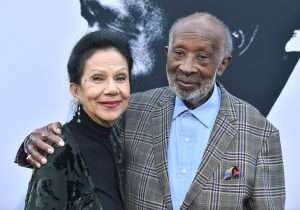 (AP) — A 29-year-old man has been arrested in the death of philanthropist Jacqueline Avant, who was fatally shot this week at the Beverly Hills home she shared with her husband, legendary music executive Clarence Avant, police said Thursday.

Aariel Maynor is currently on parole and was taken into custody early Wednesday by Los Angeles police at a separate residence after a burglary there, Beverly Hills Police Chief Mark Stainbrook said.

Police recovered an AR-15 rifle at that home that was believed to have been used in the shooting of Jacqueline Avant. Maynor accidentally shot himself in the foot with the gun, police said, and is being treated before he can be booked into jail.

Police have not yet determined Maynor’s motive, whether he targeted the Avant home or it was a random attack. It was not immediately known if he had an attorney.

An hour later, Los Angeles Police Department officers were called to a home in the Hollywood Hills — about 7 miles (11.27 kilometers) from the Avant residence — for a reported shooting. They found Maynor there, as well as evidence of a burglary at that home, and took him into custody.

Authorities do not believe there are any other suspects in the Avant case, and Stainbrook said there are no outstanding threats to public safety.

Police were called to the Avants’ home early Wednesday after a 2:23 am call reporting a shooting. Officers found Jacqueline Avant, 81, with a gunshot wound. She was taken to the hospital but did not survive.

Clarence Avant and a security guard at their home were not hurt during the shooting.

Grammy-winning executive Clarence Avant is known as the “Godfather of Black Music” and was inducted into the Rock & Roll Hall of Fame earlier this year. The 90-year-old was also a concert promoter and manager who mentored and helped the careers of artists including Bill Withers, Little Willie John, L.A. Reid, Babyface, Jimmy Jam and Terry Lewis.

Tributes to Jacqueline Avant poured in from across the country. She was remembered by former President Bill Clinton, basketball icon Earvin “Magic” Johnson, actor and director Tyler Perry and music star Quincy Jones.