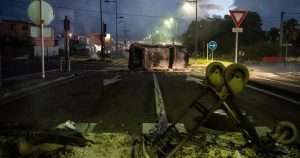 (AP) — Shots were fired overnight at security forces and journalists on the French Caribbean island of Martinique amid violent protests against COVID-19 restrictions, France’s interior minister said on Friday.

Several police officers have been injured, Interior Minister Gerald Darmanin tweeted. He added that 10 people have been arrested.

Martinique’s protesters this week joined a movement launched by labour unions in the neighbouring island of Guadeloupe to denounce France’s COVID-19 pass and mandatory vaccination for health care workers. The pass is required to access restaurants and cafes, cultural venues, sport arenas and long-distance travel.

The French government on Friday decided to delay mandatory vaccinations until December 31. The measure applies to hospitals and nursing homes’ staff, domestic helpers and firefighters.

“If the law of the Republic must apply in all French regions, and therefore in Guadeloupe and Martinique, the way it is applied must be adapted to the sanitary and social situation of these territories,” the statement said. In mainland France, the measure came into force in mid-September, with those refusing to comply being suspended.

Like in Guadeloupe, Martinique protesters have set up blockades to prevent road travel across the island.

The Prefect of Martinique, Stanislas Cazelles, imposed on Thursday a 7 pm-5 am curfew until the situation gets calmer.

In Guadeloupe, meanwhile, tensions appeared to ease on Friday. The Prefect, Alexandre Rochatte, said only minor incidents occurred and that three people were arrested overnight. He said 21 roadblocks have been lifted restoring traffic on the island’s main routes.

Attal said several dozens of police officers have been injured and around 150 people have been arrested in Guadeloupe and Martinique since the beginning of the protests last week.

Demonstrators in the French Caribbean islands are also angry over deep-seated economic, social and racial inequality, and expanded their demands to include a general salary increase, higher unemployment benefits and the hiring of more teachers.