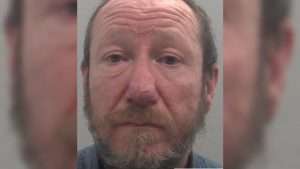 (AP) — A man who sent a bomb hoax to a United Kingdom coronavirus vaccine factory and similar parcels elsewhere, including a laboratory in Wuhan, China, was sentenced to more than two years in prison on Wednesday.

About 120 people had to be evacuated from a plant in Wales producing the Oxford-AstraZeneca shots in January after Anthony Collins, 54, sent a suspicious package there.

The British army’s bomb disposal unit was called and production of the vaccine was halted, but the batch was salvaged later after bomb experts found no explosives in the parcel.

Detective Inspector Adam Marshall said Collins “was fully aware of the impact his actions would have and chose to impede the vaccine rollout when the program was still in its infancy.”

Authorities also intercepted similar packages Collins sent to Prime Minister Boris Johnson’s office, a laboratory in Wuhan and a US Air Force base in England.

His defence lawyer Janice Brennan said Collins had a diagnosed personality disorder and had long been obsessed with sending letters and parcels.

He had developed an “obsessive interest” in COVID-19 and vaccines, she added.

But Judge David Griffith-Jones said Collins deliberately sent a bomb hoax “knowing perfectly well that it would cause fear and mayhem.”

When arrested, Collins told police that the package — which contained a calculator, a garden glove, four batteries among other items — was meant to help scientists and the government cope with COVID-19.

The judge said Collins’ insistence that he intended to help was “childish and quite perverse.”

He sentenced Collins to 27 months in prison, with time that he had already spent in custody to be deducted.