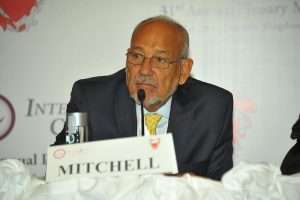 Sir James, who had been ailing for some time, passed away Tuesday morning. He is  most remembered as the second Prime Minister of St. Vincent and the Grenadines,  serving from 1984 to 2000. However, he first served as the Minister for Agriculture and  later as the Premier, after entering the political arena in 1966.

Dr. Mitchell received news of the death from a daughter of Sir James, with whom he  had been communicating in recent days, getting regular updates on his longtime  friend.

Just minutes after receiving confirmation of the death, Dr. Mitchell said, “I’m really  saddened to receive this news today. James was a very good friend, in fact he  mentored me as a young politician. I will be forever grateful for the words of wisdom  he imparted in those early years. As I too became a seasoned politician, we shared  many memorable conversations on local, regional and international issues. We shared  a love for people and empowering them to live better lives. He had a keen interest in  agriculture, his desire was to see the sector thrive, particularly the banana industry,  and he pushed to provide land for the landless. That I think will be his legacy.”

The Prime Minister added, “I’d actually been planning to visit James but was waiting  until he was released from hospital. This may be a poignant reminder that sometimes  you can’t wait, you have to act in the moment. But that is life, I spoke to him just a few  days ago and he was in good spirits so I will cherish those fond memories. I will  certainly miss him and I pray that his soul rests in perfect peace.”