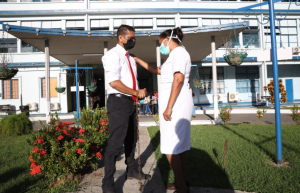 (TT GUARDIAN) – With health workers burdened by rising COVID-19 infections, one man symbolically bounded his hands with a chain at the San Fernando General Hospital to protest over the overworking of nursing staff.

As Ricardo Goolcharan, an Industrial Relations Officer at the Public Service Association (PSA), sat under the morning sun at the roundabout near the foyer, he said it was for the citizens of T&T. Goolcharan said ill citizens are meeting insufficient resources at the hospital.

Goolcharan told Guardian Media that the current ratio of nurses to patients was currently 1:30—one nurse to 30 patients.

“Nurses are coming to work and seeing their shifts changed. Management is extending shifts by about two hours. Instead of eight hours, they are trying to give you 10-12. They are moving people to the Parallel Healthcare System, where it is only 12 hours of work. You come to work today, and they are now telling you that you are leaving for Debe or Augustus Long,” a worker said.

The workers said this went against a 2015 policy and agreement that nurses would work eight-hour shifts, with two days off during their rostered week. However, they said there was a breach of this policy, without discussion with the workers.

Estate Constables initially blocked Guardian Media from recording Goolcharan’s silent demonstration but later allowed video recording. However, they said they could not allow any interviews on the compound. They also contacted San Fernando police, who spoke briefly with Goolcharan.

After a meeting with hospital administration, Goolcharan and a few other workers left to discuss the issues with South-West Regional Health Authority’s Human Resource Department.