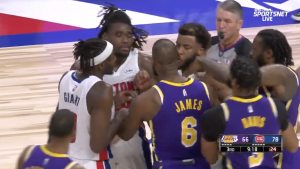 (THE ATHLETIC) – LeBron James and Isaiah Stewart were both ejected after getting into a physical altercation midway through the third quarter of the Lakers-Pistons game on Sunday night in Detroit. Los Angeles went on to win 121-116.

Prior to a free throw, James — jostling with Stewart as the shot went up — swung his arm and hit the Pistons’ big man in the face with a closed fist. Stewart, with blood dripping down his face, charged at James but both teams stepped in to stop the fight from getting worse.

After both players were separated on different sides of the court, Stewart attempted to run after the Lakers star but was held back by teammates and coaches.

Both James and Stewart were sent off the floor. The original foul on Stewart was a loose ball foul, followed by a dead ball act by James. James was then issued a flagrant 2 for unnecessary and excessive contact about the shoulder and was ejected. Wilson got two technical fouls for multiple unsportsmanlike acts during the altercation.

Lakers guard Russell Westbrook also received a technical foul, as he was deemed “an escalator and not a peacemaker,” according to crew chief Scott Foster.

This is believed to be just the second time that James has been ejected from a game in his career, with the first coming from arguing a non-call with the referees when he was with the Cavaliers in 2017.