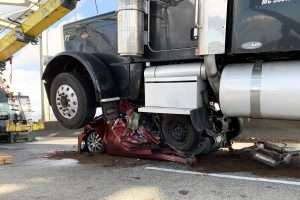 (NEW YORK POST) – A Washington state woman miraculously escaped with just minor injuries despite her car being completely crushed by an 18-wheeler truck.

Shocking photos show the semi-truck resting on top of the 46-year-old woman’s flattened Nissan Altima after striking her car from behind in Mount Vernon on Tuesday.

The woman’s car was folded in half in the wreck, authorities said.

The horrific ordeal unfolded when the woman started to brake due to upcoming traffic, but the driver of the truck wasn’t able to slow down in time and struck her from behind.

Her car was propelled forward, causing her to crash into the back of another 18-wheeler.

The semi-truck behind her then drove over the Nissan before coming to a stop.

The woman was trapped in her vehicle for a brief time, but managed to climb out on her own after a tow truck lifted the front of the semi off her car.

She miraculously only reported feeling minor rib and head pain, and was taken to a hospital to be evaluated.

“There’s really not a word to describe this collision. Miraculously believed to be minor injuries,” trooper Rocky Oliphant tweeted.

“In my 14 year career, I have never seen anything like it.”

The woman was the only person in the car at the time.