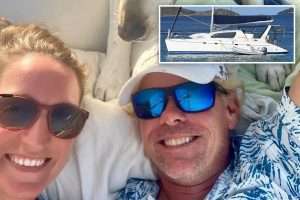 (NEW YORK POST) – The boyfriend of Sarm Heslop, the UK woman who vanished in the US Virgin Islands over eight months ago, has reportedly been lying low in Grenada as he tries to sell the luxury catamaran for $299,000.

Heslop, 41, a former flight attendant, was reported missing by her beau, Ryan Bane, 44, some 10 hours after he reportedly noticed that she wasn’t aboard his boat off St. John on March 7.

She was known to have gone for dinner with Bane, who reported her missing to police at 2:30 a.m. March 8. He reportedly notified the Coast Guard several hours later.

Bane was spotted last month around Le Phare Bleu Marina on the south coast of Grenada, a Caribbean country about 500 miles away from the US Virgin Islands, according to Fox News.

His ex-wife, Cori Stevenson, told Fox News that a photo the outlet has obtained does appear to show Bane in Grenada.

An American citizen told the network that Bane has been keeping his catamaran, Siren Song, in the island’s Le Phare Bleu Marina in hopes of selling it for $299,000.

“I talked to Ryan Bane without realizing who he was. I love dogs and went to pet his dog and I asked him the dog’s name,” the person told Fox News on condition of anonymity.

“I remember in the moment feeling very uneasy about the man as he darted his eyes around and said ‘Hunter,’ then walked away.”

Bane’s lawyer, David Cattie, has said his client immediately called 911 when he realized his girlfriend was missing.

The boyfriend has insisted through his attorney that he doesn’t know what happened to Heslop and that he has been left “heartbroken” by the ordeal.

In July, Cattie said that “if Mr. Bane’s presence is legally required in the territory, he will return upon such a demand.”

“He met with the US Coast Guard, answered all questions posed to him, and gave them unfettered access to the vessel as well as to Sarm’s personal belongings including her phone and iPad,” he added.

But the US Coast Guard issued Bane a citation — a record of an alleged violation — for refusing to allow law enforcement aboard his vessel to investigate the disappearance.

Cattie did not respond to a request for comment by Fox News on Tuesday.

In 2011, Bane was arrested on suspicion of domestic violence for allegedly attacking Stevenson, his then-wife. He reportedly served 21 days behind bars for the incident.

Stevenson told Fox News earlier this year that Bane pulled her out of a car while her seatbelt was still buckled and slammed her face into the ground, chipping her tooth.

“He’s very aggressive with girls, but he doesn’t really wanna get in fights with guys,” she said in March.