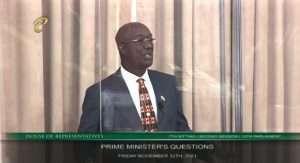 (CMC) – Trinidad and Tobago’s Parliament has given the green light to end a state of emergency (SOE) at midnight on Wednesday that had first been put in place on May 15, as a means of curbing the spread of the coronavirus (COVID-19) pandemic.

Opposition United National Congress (UNC) legislators, who from the start had been against the SOE and the curfew that accompanied the measure, abstained from voting for the ending the measure even as they questioned the haste to end the SOE that was due to expire at the end of the month.

They questioned whether the decision to end the SOE was linked to the campaign for the December 6 Tobago House of Assembly (THA) elections, where both the ruling People’s National Movement (PNM) and the Watson Duke led Progressive Democratic Party  (PDP) are in a tight race for control of the 15-member THA.

Prime Minister Dr Keith Rowley, piloting the motion to end the SOE, told legislators that the acquisition of vaccines had helped in the decision to lift the measure, even as health authorities urged people to get vaccinated against the virus that has so far killed 1, 885 and infected 63, 084 others since March last year.

“We have moved from one stage to another,” Rowley said, recalling that when the government had sought a further extension of the SOE in August he had made it clear “that the government would discontinue it at the earliest opportunity once we believe that we will not unnecessarily increase the risk and expose us to something that we do not want to be exposed to now.

“I want to give the country the assurance that at the first opportunity that is medically safe and encouraged this government will discontinue this emergency even if Parliament today approves a 90-day extension,” Rowley said he recalled telling legislators in August.

“Madam Speaker that is what I as Prime Minister told you in this House in August of this year. We gave the assurance and even as we gave that assurance Madam Speaker we could not get the support of our colleagues on the other side in a pandemic.

‘We could not convince our colleagues on the other side to give us that piece of the package of response, but interestingly enough…even as we come just ahead of the time where it is due to expire under the law and say that we are now going to end it because we have a different approach, a different arrangement in Trinidad and Tobago…we are differently armed and there is greater responsibility now on the individual and the government will continue with the vaccination programme…we have to listen to our colleagues on the other side” question the reason for ending the SOE.

“How come when we move to end the SOE you have a problem,” Rowley said, retreating that his administration had always made it clear “we will keep it for as long as it should be done.

“They have made their positing clear, very contradictory,” Rowley said, adding that throughout the duration of the SOE, there has been no report of any abuse of the human rights of citizens “even though we had given the additional power to the state and to its agencies, we have acted in an exemplary manner.

‘The only place you heard anything about tyranny and dictator …is from the opposition bench that is seeking to create political mischief. So as it ends tonight and goes down in the history of Trinidad and Tobago, I am proud to have led this country through this period in a state of emergency with no abuse,” Rowley said.

But Leader of the Opposition Business, David Lee, told Parliament that the opposition was right in opposing the introduction of the SOE,  saying it “has been nothing but a farce that has produced no benefit and was simply stifling, suffering and suppressing the citizens of our nation”.

He said almost three months ago.” we in the opposition told the prime minister that there was no need for a pointless extension of the state of emergency.

‘We rejected his claim that this was to reduce the spread of the virus and we were correct because in the last six months the only thing that this state of emergency has reduced has been the prosperity, jobs, business activity and the economic wellbeing of our nation.”

Lee said that in August the opposition did not vote in support of extending the SOE. ”because we questioned and pointed out that there was no need for an extension of the state of emergency.

“Back in August we demonstrated and pointed out to the government that the state of emergency was not working because cases and deaths were still rapidly occurring,” Lee said, noting that the prime minister could have used other options to deal with the pandemic.

In winding up the debate, Prime Minister Rowley rubbished the suggestion that the lifting of the SOE was linked to the THA elections, saying “we are shifting our focus from lockdown and state of emergency because we have a large number of people vaccinated…”

According to figures released by the Ministry of Health, 630, 871 people have been fully vaccinated, while 634, 603 have been given one dose.

PM Rowley said also opposition claims that the SOE was responsible for business closures and economic hardship, Rowley told legislators “the pandemic destroyed the economy of the world”.