Guyana Police In Record Cocaine Busts So Far This Year 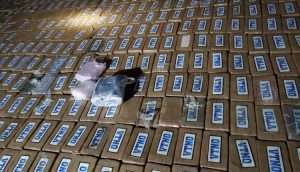 (CMC) – Guyana police say they have seized an estimated 1,182 pounds of cocaine so far this year, making the seizure the highest in the country in over 10 years.

According to the Guyana Police Force (GPF), the lowest recorded seizure of the illegal drug came in 2018, when 24.5 pounds were seized.

Deputy Commissioner of Police for Law Enforcement Wendell Blanhum said that in recent years drug traffickers have been using small aircraft to transport and smuggle cocaine.

“Recently, we found another aircraft in Mahdia and we will continue to work with the Civil Aviation Department and other joint services agencies to ensure we combat this scourge of drug trafficking,” Blanhum said, as he launched the GPF’s Christmas policing plan.

In May, police seized 998.6 pounds of cocaine on board a foreign aircraft that made an emergency landing in Orealla, Region Six. Two Brazilian nationals – Salim Nobrega De Alimser and Andre Pereira – who were on the aircraft, were remanded to prison on drug trafficking and illegal entry charges.

Blanhum said there has been an increase in the prosecution of persons charged with trafficking cocaine.

“Persons charged for cocaine this year, we increased our prosecution rate; 374 persons were placed before the courts,” Blanhum said.

But the police are also reporting an overall 19.4 per cent decline in serious crimes. Blanhum said the lowest murder rate and highest clear-up rate for murders were also recorded as well as the lowest number for all categories of robberies.

The authorities said that this is as a result of enhanced intelligence gathering capabilities such as intelligence-led operations and sting operations. The full command and control of the CCTV Centre on a 24-hour basis is also attributed to the decrease in crime.

“We have also managed to secure images of persons committing serious crimes and those images from the command centre were utilised during our court prosecution sessions,” Blanhum said.

Blanhum said there were several other challenges facing the police, noting that witnesses were absenting themselves from court resulting in the matters being dismissed.