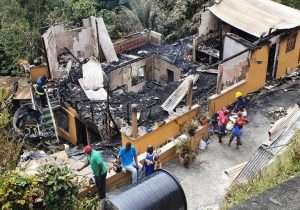 (TRINIDAD EXPRESS) – Seven-year-old Zairion Alexander is being called a hero after he saved his relatives from a fire which destroyed 95 per cent of their Moriah home.

The fire occurred shortly after 11 p.m. on Monday.

Six people are now homeless after their single-storey home was destroyed.

But the now-displaced family is thankful for Zairion, a pupil of Scarborough Methodist Primary School, who alerted the family to the blaze.

Estate Constable Sharon Carrington, who is an employee of the Office of the Prime Minister, told the Express she was awoken by her grandson Zairion who told her there was a fire.

Zairion was awake on his tablet when he and his mother realised part of the home was ablaze.

“Other members of the household were then alerted and we all escaped,” Carrington said.

A relative suffered injuries to her right hand as she broke a window to help the family escape the flames. A disabled man was also rescued.

Zairion was treated for smoke inhalation and is staying with relatives.

The Division of Education has been informed of the situation to treat with any eventuality through the Student Support Services Unit.

Acting Assistant Chief Fire Officer Ansar Ali told the Express it is suspected the fire started on the southern side of the building.

Ali said two fire tankers responded but nothing could be saved as the entire structure was alight. He said investigations are continuing into the cause of the blaze.

Tobago Emergency Management Agency (TEMA) director Allan Stewart told the Express yesterday there has been collaboration with the Division of Health, Wellness and Family Development to assist the affected family.

“The family decided to be housed at various family members. As a result TEMA and the Division of Health assisted in providing mattresses, water, food vouchers, chairs and other relief items,” Stewart said.