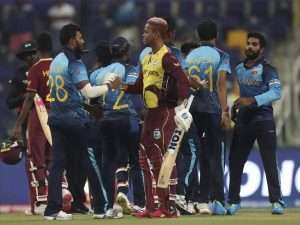 (AFP) — Sri Lanka defeated West Indies by 20 runs at the T20 World Cup on Thursday, confirming the defending champions’ elimination from the tournament.

Chasing 190 to win, West Indies reached 169-8 in their 20 overs, leaving Australia and South Africa to fight for the final semi-final spot from Group 1 where leaders England are already effectively through.

Sri Lanka ended their campaign with two wins in five games while the West Indies have one victory in four ahead of their final pool clash with Australia on Saturday.

“They have a long career ahead and a lot of good cricket to come,” Sri Lanka captain Dasun Shanaka said of Asalanka, 24, and 23-year-old Nissanka.

“Anywhere they go, they’ll have a special place in the team. I think the team is going in the right direction at the moment.”

Asalanka, coming in at number three, reached his half-century off 33 balls with a stylish innings boasting six fours.

Opener Nissanka made 51 with his fifty coming off 39 balls with five fours.

Asalanka was eventually out for 68 in the 19th over of Sri Lanka’s innings, caught by Hetmyer at deep square leg off Andre Russell having hit a total of eight fours and a six.

Shanaka added a late cameo of 25 from 14 balls.

In reply, only Hetmyer and Nicholas Pooran reached double figures for the West Indies.

Hetmyer’s 81 came off 54 balls with eight fours and four sixes.

Pooran’s 46 came from 34 deliveries and featured six fours and a six.

But the rest of the West Indies batters failed dismally with 42-year-old Chris Gayle managing just a single to take his tournament total 30 in four innings.

Fellow veterans Kieran Pollard, the skipper, was out for a first ball duck while Dwayne Bravo made just two.

“We have spoken time and time again especially from a batting perspective what we need to do as individuals and we have not done well,” said Pollard.

“A couple of young guys are putting up their hands but the experienced guys, myself included, have not done well.

“We are not going to hide from the fact that it’s been disappointing for us. I’m sure all the guys are hurting in that dressing room.”

Behind Hetmyer and Pooran, the extras column with 11 was the next highest scorer for West Indies.