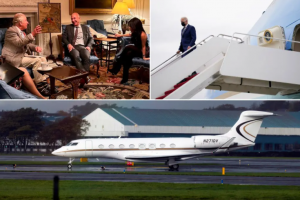 (NEW YORK POST) – As an estimated 400 private planes flew into Scotland this weekend for the COP26 UN Climate Summit in Glasgow, with Amazon founder Jeff Bezos, Prince Charles, UK Prime Minister Boris Johnson, and US President Biden in the fleet, the world leaders are being slammed for the excessive use of private transportation while they tout efforts to lower carbon emissions.

During the COP26, Biden and several other heads of state urged their allies to negotiate solutions towards lowering carbon emissions and fossil fuels.

After arriving at Prestwick Airport in Scotland Sunday, Bezos and his partner, Lauren Sanchez, met with the Prince of Wales to discuss climate change on the eve of the UN summit.

“The Prince of Wales has been involved in fighting climate change and protecting our beautiful world for five decades — far longer than most,” Bezos wrote on social media.

“We had a chance to discuss these important issues on the eve of #COP26 — looking for solutions to heal our world, and how the @BezosEarthFund can help.”

The massive influx of private jets reportedly caused traffic jams that resulted in empty planes flying approximately 30 miles to find other places to park, according to the Daily Mail.

The outlet reported that most of the planes that flew in where hired by rental firms, making it harder to identify who was on board each one.

Biden and his team flew into Edinburgh from Rome on Air Force One Monday morning. From there, Biden traveled to Glasgow for the summit by car.

Per local reports, many private vehicles in the city were seen waiting along the streets with their engines running.

“Side streets around #COP26 are choked up with chauffeur-driven cars and vans, many with their engines idling. Interesting look for a climate conference,” Channel 4 News reporter Ciaran Jenkins noted.

“The scenes from #COP26 are peak 2021 virtue signalling at its most grim. Park up the private jet jump in the chauffeur driven car as they have to get to Glasgow to tell the world to act more responsibly,” one Twitter user wrote.

“Nothing quite shows your commitment to climate action like flying to #COP26 in a private jet, and burning a few million litres of rocket fuel through the atmosphere every 5 minutes to show off to your mates. Eh Jeff?” another tweeted, appearing to call out Bezos.

“They are laughing at you. The 400 private jets used by world ‘leaders’ to get to #COP26 pumped out 13,000 tonnes of CO2 into the atmosphere, yet they want you to stop eating meat, to stop going on holiday, to buy a new electric car, & to spend thousands of pounds on new boilers,” another wrote.

Nigel Farage, the former leader of the UK’s Independence Party, accused “every world leader” who traveled to the summit on a private plane of being an “eco-hypocrite.”

“Every world leader or dignitary that arrives to @COP26 by private jet is an eco-hypocrite. Fact,” he wrote.

Some took note of the heads of state who are not attending the summit, pointing out their lack of travel may do better for carbon emissions than attending negotiations.

“China and Russia aren’t attending #COP26 because they’ve no intention of acting and will grow their energy industry while the West impoverishes their citizens through radical action. Ironically not attending is better for the planet than the hypocrites arriving by private jet,” one user tweeted.

It is not the first time Biden or his administration has been slammed for mixed messaging when it comes to climate change.

Earlier this month, Vice President Kamala Harris came under fire after flying on Air Force Two to Nevada, where she talked up Biden’s “Build Back Better” agenda and investments to tackle the climate crisis, including using electric and clean energy vehicles.

Air Force Two has been touted as “more fuel efficient” than its predecessor with a fuel capacity of 92,000 pounds, which comes out to around 11,000 gallons.

Many social media users slammed Harris for her mixed messaging, particularly during a time when video conference calls have become a part of everyday life due to COVID-19.

Biden’s own messaging on climate change was called into question just last week when in Rome, after he was seen taking an 85-car motorcade to meet with Pope Francis.

It was unclear how many of the motorcade vehicles were electric plug-ins or hybrids.

“#Decarbonize this,” one person captioned the video.

“America’s Marie Antoinette class is Washington’s elites – and that shows it,” another person responded.