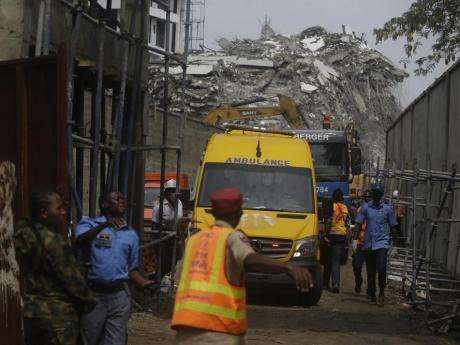 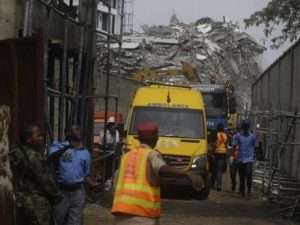 (AP) — Authorities in Nigeria have arrested the owner of a high-rise apartment building in the country’s largest city that suddenly collapsed, killing at least 14 people and leaving dozens still missing Tuesday beneath the rubble.

Nine people have been pulled out alive, an official said, but relatives were angry at what they called the slow pace of the rescue effort that began hours after the collapse on Monday.

Meanwhile, officials said the property’s developers had added six more floors than what was originally approved under their building permit in the city of Lagos, fuelling speculation that the additional weight could have contributed to the collapse.

The government-run News Agency of Nigeria reported that the building’s owner had been arrested on undisclosed charges.

“I am on the ground here and the materials he used are so inferior and terrible,” Gbolahan Oki, general manager of the Lagos State Building Control Agency, told the News Agency of Nigeria. “He got approval for 15 floors but built 21.”

Hours later, the Lagos state governor announced Tuesday that Oki had been suspended from his position indefinitely.

Co-workers say they believe dozens of people remain trapped in the debris, and only nine people have been pulled out alive over the last 24 hours, Lagos commissioner for information Gbenga Omotoso said.

“More equipment and personnel have been deployed in the site to save more lives,” he said.

On Tuesday, distressed relatives whose loved ones were missing sat together by the road consoling one another.

Afolabi Sunny said his 25-year-old sister, Oyindamola, had only recently started to work at the construction site as a participant of the National Youth Service Corps just months after she graduated from school.

“They are trying. Everybody is just trying,” he said of the rescue operation.

“But as far as my sister is not one of those brought out, they are not trying.”

Others at the scene shouted in anger, saying the rescue operation was too slow and that they should be allowed to join the effort.

It took about three hours before the first excavator arrived at the scene Monday afternoon.

“Some of us have our brothers there,” one man shouted.

“They are not doing much inside there, so why can’t they allow us?”

Mama Segun said her son had only been making a brief visit to see a friend at the construction site when the building came down.

“He wanted to go back yesterday to the United States, so he said he should come and see the landlord” before heading to the airport, she said.

He never made the flight and has not been heard from since.