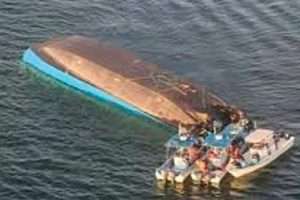 (CMC) – Several people have been confirmed dead following a shipwreck that occurred off the coast of Grosse Pointe, to the south of Haiti early Saturday.

According to the Mayor of the town of Marigot, René Danneau, a ship called Exlezias that was laden with cement, food products, fuel and a large number of passengers, wrecked off the coast of the locality of Grosse Pointe in the South-East department.

The Mayor, who told reporters that at least 20 people, including six women and two babies died, added that the ship was “overloaded”, because in addition to people it was carrying goods, including bags of cement.

Up to late Saturday, the search was continuing for survivors, however, a fuel shortage in the department prevented the rescuers of the Service Maritime et de Navigation d’Haiti (SEMANAH) from coming to the aid of the victims in time and also slowed down the search process by the authorities.

“We learned, in pain and with emotion, the sad news of the sinking of a boat this morning, ensuring the Anse-à-Pitre / Marigot route and which resulted in the death of 20 of our compatriots. We offer our condolences to the families of the victims and to the Haitian people. Faced with this new tragedy which has occurred in deplorable conditions, we wish to assure the families of the victims, as well as the survivors, of the full support of the Government and the local authorities,” Prime Minister Ariel Henry said in a statement.