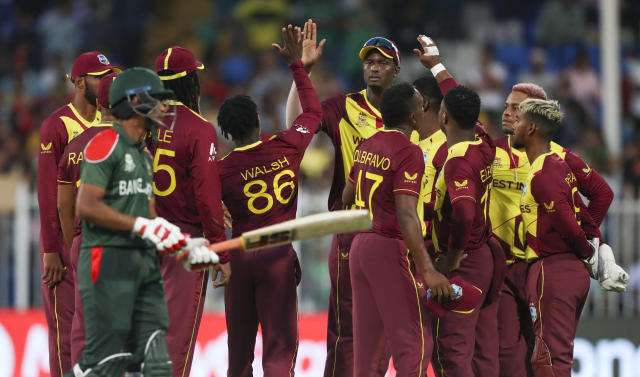 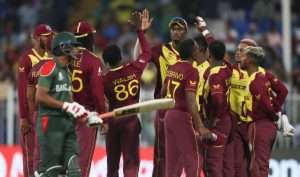 (AP) — The West Indies are still alive in the T20 World Cup.

The defending champions beat Bangladesh by three runs in a cricket thriller that went to the final ball on Friday, picking up the first win of their underwhelming title defense.

Needing 13 runs off Andre Russell’s final over to collect their own first victory in the Super 12s, Bangladesh got it down to requiring four off the last ball of the match.

Mahmudullah, the team’s captain, attempted to smash a wide yorker to the boundary but missed it completely and the West Indies could celebrate.

“He’s a big player and executed for us,” West Indies wicketkeeper Nicholas Pooran said of Russell, who conceded just nine runs off the last over — and that was because of poor fielding that blighted the game for both teams.

Bangladesh finished on 139-5, chasing 143 to win, and is almost certainly out of the tournament after three straight losses.

West Indies recovered from a slow start to post 142-7 in their 20 overs, with Pooran hitting a 22-ball 40 featuring four sixes toward the end of the innings to lift the total to something competitive.

A six off the final ball of the innings from Kieron Pollard proved important, too, with the allrounder coming back to the crease in the next-to-last over after retiring hurt with an unspecified injury earlier in the innings.

Bangladesh’s bid for victory wasn’t helped by star batter Shakib Al Hasan carrying a left leg injury sustained while fielding. He hobbled through for a couple of singles early in his 12-ball nine that ended when the recalled Jason Holder took a catch off Russell.

Holder held a better and even more crucial catch toward the end of the innings, his height proving useful as he snaffled one high on the boundary edge to remove Liton Das for a match-high 44 off the final delivery of the 19th over.

That ended his 40-run stand with Mahmudullah and robbed Bangladesh of its in-form batter for the final over, which Russell bowled beautifully.

“I think Liton’s wicket was very crucial because we were both set,” Mahmudullah said.

The West Indies bounced back from losses to England and South Africa.