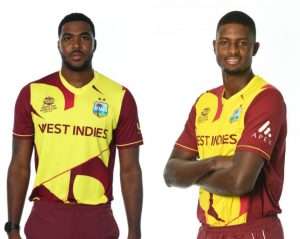 (CMC) – Leading all-rounder Jason Holder has been drafted into the West Indies 15-man squad after left-arm seamer Obed McCoy was ruled out with a shin injury Wednesday.

The 29-year-old Holder, a stunning omission from the original squad, was already one of four travelling reserves for the tournament and is now expected to find his way into the XI for the Caribbean’s must-win fixture against Bangladesh on Friday in Sharjah.

McCoy featured in the opening match against England last Saturday when West Indies suffered a chastening six-wicket defeat after being bundled out for 55, sending down two overs for 12 runs.

The 24-year-old, who has played 13 T20 Internationals, was a fitness doubt ahead of the tournament after being forced out of the last two games of the five-match series against Australia last July, and then turning out in only three matches in the subsequent Caribbean Premier League for losing finalists St Lucia Kings.

“Jason Holder has been in the UAE for a while now and will fit quite well into the team unit,” said chief selector Roger Harper.

“He is an experienced and knowledgeable cricketer who we know will be eager and excited to grab the opportunity.”

He continued: “McCoy did really well in the T20Is earlier this year and adapted well in the opening match against England.

“He was a key member of the bowling unit and it’s unfortunate he won’t be able to take any further part in the tournament.

“We wish him a speedy recovery and hope to see him back on the field ready to go again in the near future.”

Holder, a former Test captain who has 27 T20Is under his belt, is a powerful late order hitter and an effective seamer who turned out for Sunrisers Hyderabad in the recently concluded Indian Premier League.

It is the second time in as many weeks West Indies have resorted to an injury replacement after left-arm spinning all-rounder Fabian Allen was ruled out before the start of the tournament and replaced by left-arm spinner Akeal Hosein.

West Indies, the reigning champions, are staring at an early exit from the tournament and must beat winless Bangladesh in their next game in order to have any chance of qualifying for the semi-finals.

They sit bottom of Group 1 without a point, already saddled with the worst net run rate of the six teams.