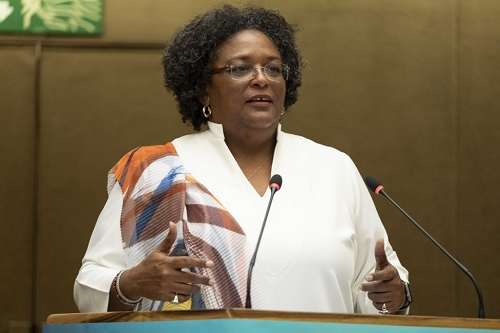 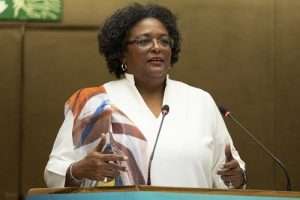 (CMC) – Prime Minister of Barbados, Mia Mottley, has called on Caribbean countries to prepare for the possibility of a climate change event that could cause mass migration and displacement in the region.

“2017 was that year that showed us the possibility of what could happen with the impact on Dominica, and Antigua and Barbuda in particular with those successive hurricanes that hit us,” Mottley said adding that, “the coastal and inland flooding due to intensified storm surges have also continued to be a problem for too many of our other countries. Trinidad, Guyana and Suriname may not be hit by hurricanes but they are hit by floods.”

“For the RSS in particular, it was estimated that two per cent of the population in St Kitts and Nevis and indeed three per cent of the population in Antigua and Barbuda could be displaced as a result of these types of events. This potential displacement leads us to enquire if the current response in our member states can accommodate management of mass migration or displacement of such a large number of persons,” Mottley said.

The RSS said that it had been working to ensure that the maritime space within its member states is secure and that in 2019, in collaboration with the Caribbean Development Bank (CDB) and the Organization of American States (OAS), it embarked on a mission to create strategies that, once implemented, would safeguard the borders and seaports within the region.

This initiative will come to completion in October this year, when the RSS will hand over the draft National and Regional Maritime Security Strategies, which will provide the foundation for strengthening the security of the maritime commons among Antigua and Barbuda, Barbados, Commonwealth of Dominica, Grenada, St Lucia, St Kitts – Nevis and St Vincent and the Grenadines.”