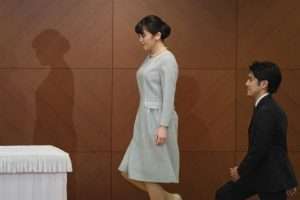 (AP) — Japanese Princess Mako quietly married a commoner without traditional wedding celebrations Tuesday and said their marriage — delayed three years and opposed by some — “was a necessary choice to live while cherishing our hearts.”

The couple’s marriage document was submitted by a palace official on Tuesday morning and made official, the Imperial Household Agency said. There was no wedding banquet or other marriage rituals for the couple. The agency has acknowledged that many people have not welcomed their marriage.

The marriage to Kei Komuro cost Mako her royal status.

“For me, Kei-san is a priceless person. For us, our marriage was a necessary choice to live while cherishing our hearts,” Mako said in a televised news conference, using an honorific in speaking of her husband.

Komuro responded: “I love Mako. I live only once and I want to spend it with someone I love. I hope to have a warm family with Mako-san, and I will continue to do everything to support her.”

Mako earlier declined a 140 million yen ($1.23 million) payment to which she was entitled for leaving the imperial family, palace officials said. She is the first imperial family member since World War II to not receive the payment and chose to do so because of criticism of the marriage.

Mako, who turned 30 three days before the marriage, is a niece of Emperor Naruhito. She and Komuro were classmates at Tokyo’s International Christian University.

On Tuesday morning, Mako left the palace wearing a pale blue dress and holding a bouquet. She bowed outside the residence to her parents, Crown Prince Akishino and Crown Princess Kiko, and her sister Kako, and then the sisters hugged each other.

The couple will move together to New York to start a new life.