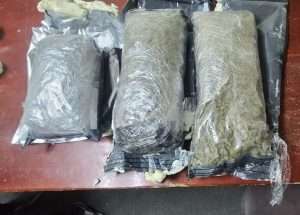 PR – Lindon Francis, Rahim Francis and Rondel Rogers all Fishermen of Soubise, St. Andrew, and Codel Douglas, a national of Trinidad and Tobago, who were arrested and charged on August 6th, 2021, following the discovery of nine (9) kilograms of cocaine at Marquis, St. Andrew. They all pled guilty to their charges of Trafficking in a Controlled Drug. While Douglas pled guilty to his additional charge of Entering the State without the Consent of an Immigration Officer. They were remanded to Her Majesty’s Prisons until October 22nd, 2021, following which, they are scheduled to return to court for sentencing.

Yacouba Toussaint, 37 years, Farmer of River Sallee, St. Patrick, was subsequently charged for Trafficking in a Controlled Drug and Conspiracy to Trafficking in a Controlled Drug in connection with the said seizure. Toussaint was granted bail in the amount of one hundred and twenty-five thousand dollars ($125,000.00) with two (2) sureties and is scheduled to reappear in court on October 22, 2021.

In an unrelated matter, Yacouba Toussaint was arrested and charged on Wednesday 20th October, 2021, following the discovery of three (3) packages of genetically modified Cannabis hidden inside a washing machine compartment that was imported by Toussaint. He was granted bail in the amount of twenty thousand dollars ($20,000.00) with one surety and schedule to appear in court on December 7th, 2021.