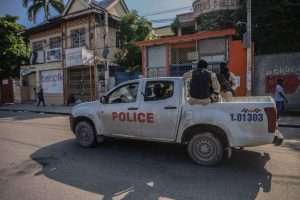 (AFP) — At least 119 people were kidnapped by criminal gangs in Haiti during the first half of October, a Haitian NGO said Wednesday, marking a significant surge that has been highlighted by the abduction of 17 North American citizens last weekend.

The increase in crime raised alarms at the Center for Analysis and Research in Human Rights (CARDH), based in Port-au-Prince, which had already recorded 117 cases for the month of September alone.

“Ninety per cent of the kidnappings are committed in the capital region, 70 per cent in the town of Port-au-Prince itself but we see, for this third quarter of the year, an increase in cases in Croix-des-Bouquets,” Gedeon Jean, director of organization, told AFP.

Since the summer, Croix-des-Bouquets, in the eastern suburbs of Port-au-Prince and home to more than 300,000 people, has been under the full control of the gang known as the “400 mawozo”, which kidnapped 17 foreign nationals on Saturday.

The victims, a group of missionaries and their family members, had gone to visit an orphanage in the heart of the area under the control of the gang.

The kidnappers are demanding a ransom of US$17 million for their release, security sources have confirmed to AFP.

The surge in kidnappings throws into sharp relief the increased domination of gangs over the country, something Haitian law enforcement agencies are unable to contain.

“Citizens do not trust the Haitian national police and this poses a problem because we cannot have an efficient police force if the population does not collaborate,” said Jean.

Popular distrust of the police is fuelled by involvement of police officers agents in criminal activities.

“According to our statistics, there are at least two policemen in every large armed group: some policemen are active in gangs and others provide cover, allowing gangs to operate, or they share information with them,” said the Haitian activist.

According to CARDH, at least 782 people have been kidnapped for ransom since January in Haiti, almost as many as in the whole of 2020, which saw 796 kidnappings in total.