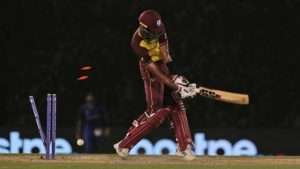 (CMC) — West Indies suffered another dent to their confidence before the official start of the ICC Men’s Twenty20 World Cup when Afghanistan combined belligerent batting and disciplined bowling to clinch a 56-run win in their final warm-up match on Wednesday.

Chasing 190 for victory, the Windies batting failed to fire, as off-spinner Mohammad Nabi opened the bowling and bowled straight through, making maximum use of the slow ICC Academy pitch, and he ended with the figures of 4-2-2-3.

Roston Chase held the West Indies innings together with 56 off 58 balls, playing the anchor role of the innings as he was expected, and Nicholas Pooran gave proof that he may have overcome his recent dip in form with 35 from 26 balls, as the defending world champions reached 133 for five.

The Windies were starved of runs early, as Nabi and his fellow bowlers restricted them to 50 for three at the halfway stage.

Chase found the going tough, managing 18 from his first 29 balls, but he blossomed later and shared 70 for the fourth wicket with left-hander Pooran to prop up the innings.

Earlier, Afghanistan won the toss and opted to bat, and the decision paid immediate dividends, as their opening pair of Hazratullah Zazai and Mohammad Shahzad mauled the loose Windies attack and set the platform for a total of 189 for five.

They took Oshane Thomas, Obed McCoy, and Chase, bowling his off-spin, to the cleaners and brought up the 50 inside five overs with an awesome display of hitting inside the powerplay.

Only left-arm spinner Akeal Hosein, drafted into the Windies 15-member squad to replace the injured Fabian Allen, provided any control early on.

The openers posted high-tempo half-centuries before leg-spinner Hayden Walsh Jr got Hazratullah for the top score of 56 and pacer Ravi Rampaul claimed Shahzad for 54.

A score of more than 200 looked on the cards, but West Indies dragged back the scoring rate after the departure of the Afghan openers.

The Windies will be going in search of an unprecedented third title and face England on Saturday at the Dubai International Cricket Stadium in their first match, which is a replay of the 2016 final they won.