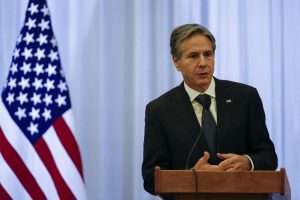 (AFP) — The United States on Tuesday vowed to do all in its power to free US and Canadian missionaries taken hostage in Haiti, after kidnappers demanded US$1 million for each of the group of 17.

A gang known as 400 Mawozo has been identified as behind the kidnapping of the group, which includes five children, on Saturday.

“We have in the administration been relentlessly focused on this,” US Secretary of State Antony Blinken told a news conference on a visit to Ecuador, saying an FBI team was involved.

“We will do everything we can to help resolve the situation.”

The kidnapping by one of Haiti’s brazen criminal gangs has underlined the country’s deepening woes following the assassination of president Jovenel Moise in July, with lawlessness mounting in the Western hemisphere’s poorest nation.

The missionaries work for US-based Christian Aid Ministries, which said that the group was abducted east of the capital Port-au-Prince while returning from visiting an orphanage between the city and the border with the Dominican Republic.

The area has been under the control of 400 Mawozo for months, with security sources telling AFP that the gang wants a total of US$17 million paid in ransoms.

Haitian Justice Minister Liszt Quitel confirmed that the gang was responsible for the kidnapping of 16 Americans and one Canadian.

He told The Washington Post that kidnap gangs usually demand huge sums of money which are reduced during negotiations, saying his officials did not take part in the talks.

The captive group is made up of five men, seven women and five children whose ages have not been disclosed.

Blinken said that the State Department was in close contact with the Haitian government over the kidnappings.

“Unfortunately, this is also indicative of a much larger problem and that is a security situation that is, quite simply, unsustainable,” he said.

“That can’t go on. That’s certainly not conducive to an environment in which the work that needs to be done,” including “investments that need to be made in the people of Haiti, in their future, can be made.”

In April, 10 people including two French clerics were kidnapped and held for 20 days by 400 Mawozo in the same region.

The United States in August issued a red alert on Haiti, urging Americans not to travel to the Caribbean nation because of rampant kidnapping, crime and civil unrest.

On Monday a general strike was called to protest the rapidly disintegrating security nationwide.

In Port-au-Prince, shops, schools and government buildings were shuttered but schools were opened in several other towns around the country.

Cases of kidnappings have more than doubled in Haiti over the past year as gangs are growing increasingly numerous and powerful, leaving an already weak police force unable to cope.