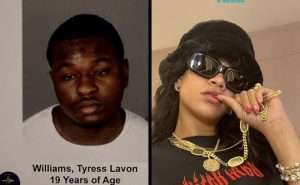 (URBAN ISLANDZ) – One of the burglars who broke into Rihanna’s home in Hollywood in 2018 is going to spend the next nine years in prison after he was sentenced on Thursday.

Tyress Williams and three others are part of a group responsible for breaking into not only Rihanna’s home but and other celebrity homes in 2018.

Williams was sentenced on Thursday by a judge for the burglaries, which included hits on the homes of Rihanna, Christian Milian, former MLB outfielder Yasiel Puig and NFL wide receiver Robert Woods where they stole personal items of value, cash, jewelry, clothing, and other things from the celebrities.

The 22-year-old had pleaded no contest to one count of first-degree burglary with a person present and one count of second-degree commercial burglary. He has been behind bars since he was arrested and charged in 2018. His co-defendants are Jshawne Daniels, Damaji Hall, and Hall’s mother, Ashle.

Ashle, who was 34-years-old at the time of the crime, was the only adult member of the group while the other three were teenagers – Williams and Daniels were 19, and Hall was 18.

The group was charged among 31 people who were indicted for unlawfully raiding the homes of celebrities as well as elderly and Asian victims.

Their modus operandi included a series of robberies in a concentrated part of Los Angeles, considered one of the wealthiest neighborhoods in the LA metro area.

So far, police have successfully prosecuted 23 of the 31 ring burglars, with all 23 sentenced to prison.

According to the prosecution, Williams and his co-conspirators studied their victims closely by watching their social media accounts to know their touring and travel schedules and to know when they were out of the country to make their plan come through, the Daily Mail reported.

Police connected the burglars at Rihanna’s home to be the same ones responsible for the home invasion of rapper Chief Keef’s home in September 2018. Police say among the thing they stole from Rihanna’s home was expensive purses and cash.

Meanwhile, in a separate case, the Rihanna obsession is real. In 2018, a different burglar Eduardo Leon broke into the singer’s house and spent the night in the artist’s mansion. He was arrested for stalking but later released on $150,000 bail.