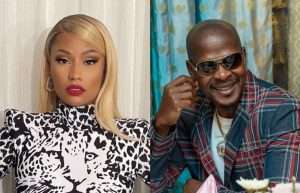 (URBAN ISLANDZ) – Dancehall deejay Mr. Vegas says that Nicki Minaj’s team has failed to acknowledge his publisher’s rights and that the samplers are cutting him out of his share of royalties.

Earlier this week, the Mr. Vegas claimed that Nicki Minaj and Drake were “Culture Vultures” who merely view dancehall as “little flavoring for albums and remixes.”

While the deejay was attacked by the Barbz for bringing down their leader, Mr. Vegas came back with receipts to prove that he was being cut out from getting any royalties from Minaj’s “Megatron,” which samples the Filthy Riddim that Mr. Vegas’ is on.

In a screenshot, Mr. redacted parts of the email to hide the sender and receiver. However, the body of the email was telling and it read:

“Hi All, this is registered as we show it at ASCAP. It is in conflict at HFA & Music report. As you can see below, the other publishers currently listed on the registrations do not agree that Mr. Vegas should have a share. I can’t do anything with it if the other publishers won’t recognize Mr. Vegas,” the email read.

The email did not identify who the other publishers are that did not want Vegas to get a cut of the royalties.

Earlier this week, Mr. Vegas praised Cardi B for hosting an authentic dancehall-themed “Passa Passa” party for her 29th birthday this week, something he says isn’t done by other artists in which he singled out Drake and Nicki Minaj.

“Unlike Nikki and Drake, Cardi sincerely loves dancehall. She does not see it as a little flavoring for albums or remixes. The queen dedicated her birthday to wi culture (passa passa dancehall). This is how you know she is not a vulture,” Vegas, who was one of the artists performing his 90s hits at her party wrote in all caps on his Instagram and Facebook accounts.
However, the artist addressed those who based him when he called out Minaj and Drake.

“Again! F–k all the samplers of Reggae Music who blocks the artistes share. How can an artist not acknowledge another artiste’s rights? Fvuk you and your trolls,” Mr. Vegas said in all caps on Friday morning on Instagram as he hashtagged #Megatron his song #headshigh and noted in a separate hashtag #onecomposition, implying that he ought to be recognized for the sample.

On YouTube alone, “Megatron” song has 128 million views since being released. This is in large part due to the song’s infections dancehall beat, which sampled Danny Browne’s Filthy riddim on which Mr. Vegas’ “Heads High” was also laid. Arguably Mr. Vegas’s song was among the two biggest hits on that riddim (him and General Degree’s “Traffic Blocking”.

Meanwhile, in previous reports, Browne had disclosed that he gave clearance for the rapper to use his work, and he is now credited as a co-writer for “Megatron.” In an interview with the Jamaica Observer in 2019, the producer admitted that “Heads High was possibly the biggest song” on the riddim.

It’s unclear, however, what rights Mr. Vegas holds in relation to the rights for the original riddim and whether his grouse is actually with Browne rather than Nicki Minaj. So far, neither Browne, Drake, nor Nicki has responded to Mr. Vegas.