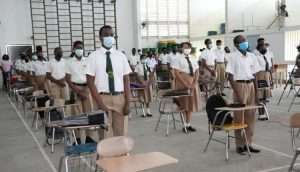 (CMC) — Guyana has emerged at the top of this year’s Caribbean Advanced Proficiency Examinations (CAPE).

This was announced on Thursday by director of operations at the Caribbean Examinations Council (CXC), Dr Nicole Manning.

The examination body made the official announcement of the 2021 CAPE and Caribbean Secondary Education Certificate (CSEC) results at the Arthur Chung Conference Centre.

“Overall, Guyana’s (CAPE) performance was marginally higher compared to the rest of the region,” Manning said. “We had 16 units of which 100 per cent candidates received Grades One to Five.”

Manning indicated that 70 per cent of students were able to attain Grades One to Three passes.

For 2021, there were two sittings of examinations — June/July for the region and a separate sitting for the St Vincent and the Grenadines cohort due to the unexpected eruption of the La Soufrière volcano on the island.

CXC also implemented measures aimed at reducing the pressure on students. Manning indicated that one such measure was the reduction in School-Based Assessments (SBAs) requirements. CXC had also reduced the requirements for specific subjects given COVID-19 restrictions such as oral examinations.

“For the first time, we would have introduced a facility known as deferral for those who might have felt as if they were not ready to sit exams in 2021. They had the opportunity to defer all or some of the subjects. We had also given them an opportunity, also for the first time ever, for students to deter submitting their SBAs until 2022,” Manning articulated.