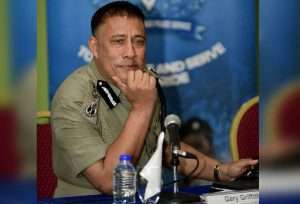 (TRINIDAD EXPRESS) – FROM midnight tonight and for the first time since Trinidad and Tobago achieved Independence status in 1962, the country will not have either a Commissioner or acting Commissioner of Police.

For how long the Police Service will be operating without a Commissioner is a matter that is now totally up to President Paula-Mae Weekes and her ability to reconstitute a new Police Service Commission (PolSC).

Only when this is done, can the process for selecting the country’s next Police Commissioner can be resumed by the reconstituted commission.

Over the past couple of weeks, Trinidad and Tobago also did not have a functioning PolSC, following the resignations of its three members and chairman Bliss Seepersad.

The latest development came amidst several weeks of controversy since former police commissioner Gary Griffith’s three-year contract came to an end on August 17.

On Thursday afternoon, Justice Nadia Kangaloo declared that the appointment of Griffith as acting commissioner by the previous PolSC after his contract came to an end was illegal and unconstitutional in accordance with Section 123 of the Constitution.

The matter before the court was an interpretation summons brought by social activist Ravi Balgobin Maharaj who argued that Griffith was not lawfully appointed by the past commission.

This was so he said, because the PolSC the procedure set out in Section 123 (2) to (5) of the Constitution was not followed.

Under that Section, the Commission was required to prepare a list with its nominations, have it issued to the President who was then constitutionally mandated to have it issued to the House of Representatives for consideration and approval by both the Prime Minister and Leader of the Opposition.

While the list was in fact sent to President Weekes on August 12, it was not issued to Parliament, but the PolSC went on to appoint Griffith to act any way.

In her ruling, Justice Kangaloo said Sections 123 (2) to (5) were clear and unambiguous that the commission’s selection for the position ought to have received Parliament.