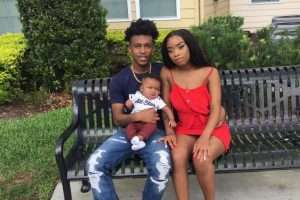 (AFP)— The father of a two-year-old child who fatally shot his mother in the head while she was on a Zoom meeting, has been arrested in Florida for failing to keep the gun out of the toddler’s reach.

Veondre Avery, 22, who was charged with manslaughter and failure to securely store a firearm, was taken into custody on Tuesday, police and a prosecutor said.

Avery had stored the gun — loaded and without the safety on — in a backpack themed with the children’s television series “Paw Patrol.”

The boy’s 21-year-old mother, Shamaya Lynn, was shot in their home on August 11 with a single bullet, while in the middle of a Zoom meeting.

In a phone call to emergency services, one of Lynn’s co-workers can be heard saying: “One of the girls passed out, she was bleeding. She has the camera on. Her baby is crying in the back,” according to the Orlando Sentinel newspaper.

Avery, who had been away during the incident, also contacted emergency services upon his return, begging them to “please hurry,” according to the paper.

Police officers arrived to discover Avery trying to revive his girlfriend in their apartment in Altamonte Springs, a city north of Orlando. But she was pronounced dead shortly thereafter by paramedics.

A trial date has not yet been set, according to a statement from District Attorney Dan Faggard.

Accidental shootings by children are not unheard of in the United States. In late September, a two-year-old boy accidentally killed himself in Texas after finding a loaded gun in a relative’s backpack.

“Every year, hundreds of children in the United States gain access to unsecured, loaded guns in closets and nightstand drawers, in backpacks and purses, or just left out,” said a recent report by Everytown For Gun Safety, a firearms control advocacy group.

According to the organisation, unintentional shootings by minors have caused 879 deaths since 2015 and 114 this year.