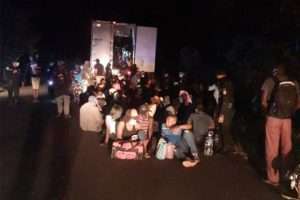 (NEW YORK POST) – More than 100 Haitian migrants were rescued by police after being abandoned inside a shipping container on the side of the road in Guatemala — part of a continuous flow of people trying to enter the US illegally, according to a report. ​

Police investigated after locals reported hearing screams inside the trailer ​around dawn on Saturday. ​

Inside, Guatemalan police found 126 people who they believe were abandoned by smugglers paid to ​guide them to the US border, the BBC reported. ​

Guatemala’s migration authority said the group traveled through Honduras on their journey to the US.

The migrants will be returned to the Central American country, the BBC reported.

Haitians have been making the perilous trek to the US for months from South American countries they fled to after escaping Haiti following disastrous earthquakes in August 2010 and political unrest in the wake of President Jouvenal Moise’s assassination in July.​

More than 13,000 Haitians gathered at a makeshift camp under a bridge in Del Rio, Texas, last month before they ​were either deported to the Caribbean island, detained or released in the US.

Thousands of Haitian migrants have been crossing the Darien Gap, a treacherous strip of jungle connecting Colombia and Panama, and up to 20,000 more are waiting in Colombia, poised to begin their journey north.