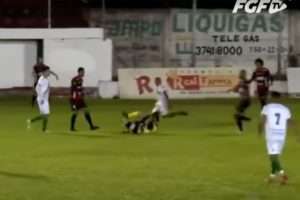 (NEW YORK POST) – A Brazilian soccer player is facing attempted murder charges for allegedly kicking a referee in the head during a game.

“I don’t really remember,” Crivellaro, who was treated and released from a local hospital the following day, told a local station, CNN said.

“My referee colleagues told me that I gave him a yellow card,” he said. “He punched me in the face. I fell to the ground, got kicked, and passed out. This player needs treatment because he is totally out of control. He deserves to be arrested for a long time.”

Authorities said Ribeiro was arrested and released Tuesday — and booted from the team.

Rio Grande do Sul said in a statement after the game Monday that it was “deeply ashamed” over the incident and had cut ties with Ribeiro.

“The aggressor athlete’s contract is summarily terminated,” the team said in a statement, according to CNN. “Furthermore, all possible and legal measures in relation to the fact will be taken.”