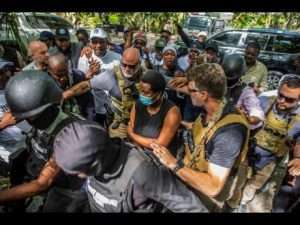 (AP) – Martine Moïse, the widow of Haiti’s assassinated president, Jovenel Moïse, travelled to her homeland to answer questions behind closed doors on Wednesday from a judge overseeing the murder case.

Surrounded by heavy security, Moïse waved to supporters who yelled “Justice!” and entered the courthouse in the capital of Port-au-Prince, emerging almost three hours later.

“I answered 80 questions,” she said. “I gave him all the information I had.”

The investigation into the July 7 attack in which President Jovenel Moïse was shot several times at his private home and his wife injured continues as many wonder who masterminded and financed the assassination. More than 40 suspects have been arrested, including 20 Haitian police officers and 18 former Colombian soldiers, with Colombian officials saying the majority did not know the true nature of the operation. Authorities say other suspects are still on the run, including a former Haitian senator.

As Martine Moïse left the courthouse, a group of about 50 supporters surrounded her car and chanted, “This is my mom! This is my mom!”

Before departing, Moïse said she was seeking justice for her husband: “I’m calling on everyone who knows something about the assassination of my husband to bring some information to authorities.”

She declined further comment except to say that it is the first time she speaks to the judge about the case and that she would be available any time she is needed. Moïse was flown to Miami after being shot and has been temporarily living there.

Earlier in the day, supporters wearing white T-shirts emblazoned with a picture of Jovenel Moïse chanted and clapped as several yelled that the assassination was a blow for them. Some of them scuffled with critics of Moïse who also were present.

Martine Moïse was interviewed the same day that the ombudsman-like Office of Citizen Protection held a press conference to demand that authorities investigate Haitian Prime Minister Ariel Henry. The former chief prosecutor of Port-au-Prince, whom Henry fired, said the prime minister had received two phone calls from a key suspect just hours after the assassination.

Henry recently told The Associated Press that he does not recall receiving those calls, adding that he fired the prosecutor and the justice minister as he accused them of not being credible or ethical.

The Office of Citizen Protection also requested that the United Nations launch an international commission of inquiry.