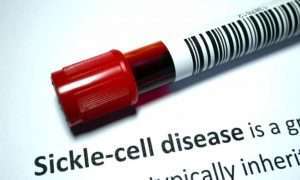 (BBC) – The first new sickle-cell treatment in 20 years will help keep thousands of people out of hospital over the next three years, NHS England has said.

Sickle-cell disease is incurable and affects 15,000 people in the UK.

And the National Institute for Health and Care Excellence said the hope of reducing health inequalities for black people, who are predominantly affected and often have poorer health to start with, made the drug worth recommending.

It called it “an innovative treatment”.

The drug, crizanlizumab, made by Novartis, is injected into a vein and can be taken on its own or alongside standard treatment and regular blood transfusions.

And in a trial, patients taking the crizanlizumab had a sickle-cell crisis 1.6 times a year on average, compared with nearly three times a year normally.

These painful episodes, which can require hospital treatment and lead to other health complications, are caused by by sickle-shaped red blood cells blocking the small blood vessels .

But because the trial was small and lasted only a year, it remains unknown how long the benefits last for – and that makes it difficult to judge how cost-effective crizanlizumab is.

Nevertheless, NICE, which recommends treatments in England and Wales, is recommending its use for over-16s, albeit under a special arrangement rather than routinely, on the NHS.

And additional data on the treatment will be collected through clinical trials.

NHS chief executive Amanda Pritchard said: “The moment that a new drug comes that is approved to be used, our job is to make sure that we can do a deal to ensure it’s affordable and get it out as quickly as possible.”

‘Every day is pain’

Diagnosed at birth, Sarah-Jane Nkrumah, 27, had her first crisis aged six months and has chronic pain in her joints.

“Every day is pain,” she says.

“I don’t remember the last time I had zero pain.”

Sarah-Jane prefers to take breaks from taking painkillers – but some days cannot get out of bed.

“You just have to try and manage it,” she says.

“It’s all about having a lot of mental strength and support.”

And every six weeks, she has a blood transfusion to boost her energy levels.

“I feel weak and exhausted leading up to them and refreshed and stronger afterwards,” she says.

“Thanks to donors, I get a chance to live another day.”

Sarah-Jane had to give up her ambition to become a nursery teacher because it put her at risk of serious infection.

“Now, I have found my true purpose and love spreading awareness of sickle-cell disease,” she says.

Meindert Boysen, deputy chief executive and director of the Centre for Health Technology Evaluation, at NICE, said: “Treatment for sickle-cell disease has been limited for years and there has been a lack of treatments for patients whose lives are affected by the condition.

“Crizanlizumab… has shown the potential to improve hundreds of lives and we are delighted to be able to recommend it as the first new treatment for sickle cell disease in two decades.”

What is sickle cell disease?