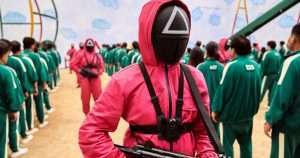 (DAILY MAIL) – Netflix bosses are being sued by a South Korean internet provider over the stratospheric popularity of gory survival drama Squid Game.

The show has soared in popularity worldwide since its release on Netflix last month and has been pegged to become the service’s most successful show to date.

Controversy has arisen however, as according to Reuters, a South Korean internet service provider, SK Broadband, is suing Netflix over increased traffic thanks to the streaming service’s popularity in the country.

The internet provider said in its claims that Netflix is South Korea’s second-largest traffic generator besides YouTube, and states that other streamers – Amazon, Facebook and Apple – are all paying network usage fees.

SK Broadband alleges that traffic from Netflix on its network has increased 24-fold from May 2018 to September 2021.

It’s now processing a whopping 1.2 trillion bits of data per second as of September – the same month that Squid Game was released on the 17th.

The internet provider wants Netflix to pay for network access dating back to 2018. For 2020 alone, that amount was estimated to be around 27.2 billion won ($31.55million AUD).

In a statement to CNBC on Friday, a spokesperson for Netflix said: ‘We will review the claim that SK Broadband has filed against us.

‘In the meantime, we continue to seek open dialogue and explore ways of working with SK Broadband in order to ensure a seamless streaming experience for our shared customers.’

Last year, Netflix brought its own lawsuit as to whether it was obligated to pay the provider for network usage. The streaming giant argued that its own duty ended with creating content, and leaving it accessible.

However, the Seoul Central District Court ruled against Netflix, saying the streamer should ‘reasonably’ pay something to SK Broadband for network usage.

Netflix appealed, with fresh proceedings set to start in December.

The streaming giant said last week that it has helped create 16,000 jobs in South Korea.

Ruling party lawmaker Kim Sang-hee said on Wednesday that out of South Korea’s top 10 data traffic generators, 78.5% of the traffic came from foreign content providers, up from 73.1% a year earlier, with “Google-YouTube and Netflix that account for the majority turning a blind eye to network usage fees”. ($1 = 1,187.3400 won) (Reporting by Joyce Lee; Editing by Raju Gopalakrishnan)

Meanwhile, Squid Game has soared to popularity globally ever since its release last month – with Netflix co-CEO Ted Sarandos saying it has a a ‘very good chance’ of becoming the streamer’s most popular show yet.

The South Korean series is a survival thriller set in modern-day Seoul, where a group of 456 people are invited to play a series of children’s games with the chance to win a huge amount of money – but if you lose in the game, you lose your life.