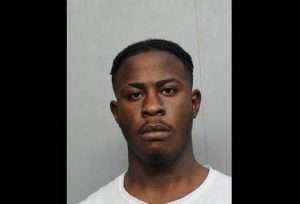 (JAMAICA OBSERVER) – Jamaican football player, Jahshaun Anglin, was arrested by Miami-Dade police for sexually assaulting a woman in a classroom on the campus of Florida International University (FIU) in the United States on Tuesday.

Anglin, 20, has been charged with one count of sexual battery.

The Jamaican is currently being held on US$10,000 in police custody.

He has so far played 12 games this season for Miami FC soccer club in Florida and has represented Jamaica three times in international competition.

According to a report from NBC 6 South Florida, the arrest report stated that Anglin met a female near 11000 block of Southwest 12th Street. The two subsequently agreed to meet up at another location.

After meeting at that unidentified location at FIU, the Jamaican reportedly asked the female for what is being described as “a sexual favour” inside a room. However, she refused, the report said.

Further reports are that Anglin assaulted the female complainant by placing his hands in her underwear.

The victim allegedly tried to leave, however, the footballer prevented her from doing so, the report claimed.

While allegedly “performing a sexual act” on her, Anglin was caught by a witness who walked into the room. He then fled the area.

The matter was reported to the Miami-Dade police, and Anglin was later arrested after the complainant identified him.

“…We are cooperating with local enforcement officials on this matter,” the club stated, adding that it had no further comment on the development.