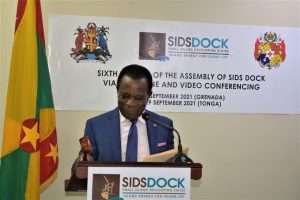 PR – Prime Minister, Dr. the Right Honourable Keith Mitchell is confident that despite the major disruptions caused by the COVID-19 pandemic, the work of SIDS DOCK remains critical to the future of small islands developing states like Grenada.

Dr. Mitchell has just completed an unprecedented second term as President of the SIDS DOCK Assembly, after being asked to extend his presidency due to the death of President-designate in 2019.

Delivering his report to the 6th Session of the SIDS DOCK Assembly on Tuesday, Dr. Mitchell noted that the organisation has modified its work programme to focus more on ocean energy, given the new reality created by the impact of the pandemic.

He said, “Ocean energy development is critical to meeting the Sustainable Development Goals for Small Island Developing States (SIDS). It is the foundation for the blue economy that will help make us more resilient, and increase our ability to build back better, but we need assistance from our development partners.”

Dr. Mitchell said SIDS must pin their hopes for the future on the oceans and he noted that the new SIDS DOCK President will inherit a portfolio of projects that are heavily focused on the oceans as a source of energy. He said continuity will be a key watchword as the organisation focuses on ocean energy as a primary source of renewable energy for SIDS.

Updating colleague heads and other assembly attendees on the work of SIDS DOCK, Dr. Mitchell spoke of the imminent launch of a Global Ocean Energy Alliance, a concept derived from discussions at the Vienna Energy Forum in 2018, in partnership with the United Nations Industrial Development Organisation (UNIDO). It is anticipated that the alliance will be launched at the upcoming United Nations Climate Change Conference (COP 26) in Glasgow in November.

Dr. Mitchell said, “The alliance will launch an Ocean Energy for Blue Economies Platform, which facilitates south-south and triangular cooperation between SIDS, coastal nations, academia, industry players and financiers. Ocean energy as the largest source of sustainable energy on the planet, will be the catalyst for sustainable development across SIDS. The alliance will be a Public-Private-Partnership, designed to facilitate more inclusion and greater efficiency in advocacy and supporting private sector ocean energy investments globally.”

The Grenadian Prime Minister invited development partners to join the alliance and help with the protection and conservation of oceans which can be a principal source of energy to help many islands survive and thrive.

The Prime Minister ended his remarks with an expression of thanks for the unprecedented  honour and confidence placed in him to guide SIDS DOCK through one of the most  challenging periods and he pledged continued support for the work of the organisation.