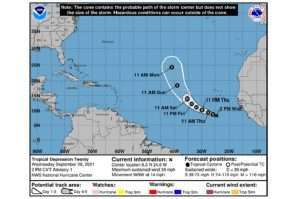 (FLORIDA TODAY) – The National Hurricane Center is monitoring four systems in the Atlantic, including a new tropical depression.

Tropical Depression 20 formed in the far eastern Atlantic Wednesday morning, according to the Hurricane Center. It’s forecast to become a tropical storm tonight and a hurricane within 48 hours.

Hurricane Sam remains a powerful Category 4 storm and is expected to remain a major hurricane through late this week.

While models calls for Sam to head north into the Central Atlantic and avoid a direct impact on the U.S., swells are expected to reach the East Coast by this weekend. These swells could cause life-threatening surf and rip current conditions.

Elsewhere in the Atlantic, another depression could form out of a system of low pressure farther west of Tropical Depression 20.

While there’s a chance for the formation of a short-lived tropical depression to develop out of the remnants of Peter, those chances are decreasing.

There are two names left in the 2021 Atlantic hurricane season, Victor and Wanda.