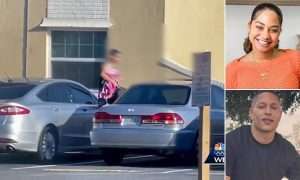 (NEW YORK POST) – The dead maintenance man suspected in the disappearance of Florida teen Miya Marcano was apparently caught on camera carrying gloves, a blanket and a bag the day she went missing.

Marcano, 19, disappeared from Orlando’s Arden Villas apartments, where she lived and worked, on Friday night. Armando Caballero, 27, also worked at the complex, where his romantic interest in the young woman was repeatedly rebuffed, investigators said Monday.

A man matching Caballero’s description was seen carrying the suspicious items into an unknown building on Saturday morning, hours after Marcano was last seen alive, according to WESH 2.

The license plate of the car in the video matched that of the car that police towed away in connection with the investigation, the station said.

The person of interest had inappropriately entered her apartment with a master key just before she was last seen, according to police. Family members said there were signs of a struggle in her bedroom.

Marcano’s family members continued their desperate search for the woman in a wooded area around the area where Caballero took his own life Tuesday, as others knocked on doors to hand out flyers, according to the Orlando Sentinel.

Uncle Marc Marcano said he has been coaching volunteers to leave no stone unturned, the paper reported.

“Think about if you were kidnapped, what would you want to do?” he reportedly said. “If you’re handcuffed or tied to something in a room, you’re not going to be right next to the window, so you gotta listen for the faintest sounds. Say her name. Knock on the door and say her name.”

Marcano had a ticket to fly to Fort Lauderdale Friday night and see her parents. She never boarded the plane, and was last seen around 5 p.m. at the Arden Villas apartment.