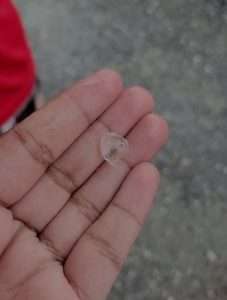 (CNC 3) – A severe thunderstorm has produced hail across parts of north-central Trinidad on Monday afternoon.

Around 1:30 PM, pellets of ice fell from the sky across Trincity, Arouca, El Dorado, Tacarigua and environs.

Videos began circulating on social media showing people picking up small chunks of ice in their lawns and driveways as torrential rain fell.

For those that live in the areas affected, this hail would have sounded like large raindrops hitting the roof, as it is too small for damage, and it was too hot for any accumulation.

Hail is rare in T&T, but not unprecedented. It last occurred on September 8th, 2020.