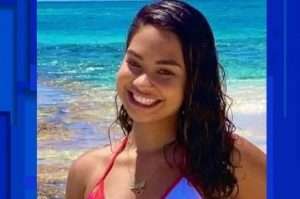 Marcano is the daughter of Soca Dj Marlon Marcano, also known as djeternalvibes. She has been missing since Friday.

At press conference hosted yesterday by Florida’s Orange County Sheriff’s Office, it was announced that a main suspect in her disappearance was found dead at his apartment in Seminole County, Florida.

“It appears he has killed himself,” Florida’s Orange County Sheriff John Mina said.

He was identified as Armando Manuel Caballero, a maintenance person since June at the apartment complex (Arden Villas Apartments) where Miya works, lives and was last seen.

His discovery pushed the scheduled press conference time for 1 pm to 3 pm.

According to the Sheriff a warrant was issued for 27-year-old Caballero after evidence showed that a master key, which Caballero is known to be in possession of, was used to enter Miya’s apartment half an hour before her shift ended at the apartment complex.

“We have been actively searching for this weekend,” the sheriff said.

Mina said detectives and her family members suspect foul play as there were signs of a struggle inside her apartment.

The UK Daily Mail reported that police found blood stains on the pillow, a blocked bedroom door and an unlocked window.

On Friday, the day she disappeared, Caballero told police that he last saw her at 3pm. Mina said Caballero showed a romantic interest in the 19-year-old college student but the feelings were not reciprocated and his attempts were declined.

“Miya is still missing, her disappearance is suspicious,” Mina added.

But her family is not giving up hope, her aunt Pia Scarbriel Henry said they know she is somewhere out there alive because she is strong.

“Me and you had that conversation, Miya anytime something should happen fight because we have your back,” she said.

Henry said Miya, her only niece, is the family’s princess.

“We miss you and we are here waiting for you” she added.

Her father Marlon posted how difficult life has been without her.

“My heart is aching. I haven’t slept or eaten in days… Never have we ever gone so long without even a text message to each other,” he posted to his Instagram.

Several soca artiste have also shared the missing persons bulletin on their pages as they would have either know her or her father personally.

“Please come home baby girl… we need you,” her aunt the Wassi one wrote on Facebook.

A candle light vigil was held for the missing teen on Sunday.