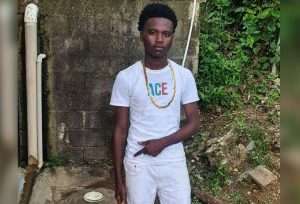 (TRINIDAD EXPRESS) – POLICE shot and killed a teenage dancehall artiste near his Laventille home on Saturday night, claiming he had pointed a gun at them, but his friends and neighbours alleged that he was killed unjustly.

As a result, residents burned debris in the street as they called for a “proper investigation” into his death.

Jaheim Joseph, 19, was known in the underground dancehall scene as Chucky Blanco.

He is the 31st person killed by police for the year.

Police said that, shortly before the 9 p.m. curfew on Saturday, officers of the Inter Agency Task Force drove into Mango Alley, Laventille, where they stopped near a group of men.

Police said one of them had a gun which he pointed at the officers. Police said they took cover and fired at the gunman.

While the other men fled, the police picked up the injured gunman and took him to Port of Spain General Hospital, where he was pronounced dead on arrival.

“Not so,” said Joseph’s friends.

They painted a different picture when the Express visited the scene.

They claimed that shortly before 9 p.m., a birthday party was being held for a six-year-old boy in the area when police stopped by. They said that several officers got out of a vehicle and ran after Joseph and a group of men who ran off down a hill at the back of the house.

They claimed that while the men were running, police opened fire on them, hitting Joseph several times about the body, following which they picked him up and took him away.

The five men who spoke to the Express said that Joseph and the other men that night did not have any guns with them.

None wanted their names mentioned but one said: “Joseph had no convictions, no criminal record and no previous run-ins with the law.”

One of his songs, “Chucky KRR”, released in May last year, amassed more than one million views and featured what he described at the beginning of the video as prop/fake guns.

Joseph said the intention of the song was to portray snippets of his everyday life and past experiences.

He chided mainstream radio stations for not playing his songs and thanked the “underground scene” for accepting them.